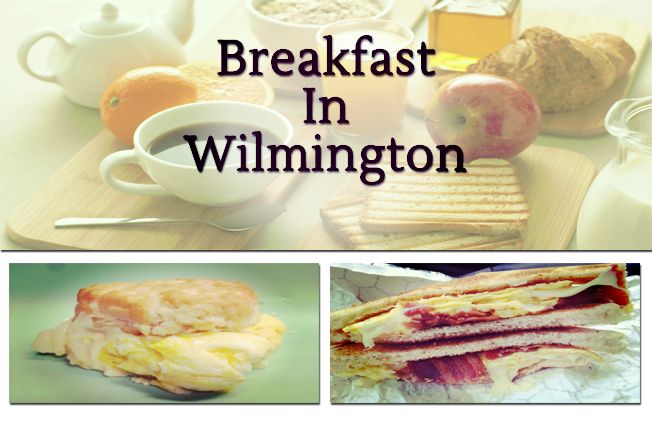 “In many ways, the breakfast is the most important meal of the day, because it is the meal that gets the day started. It should not be eaten hurriedly, and all the family, so far as possible, should partake of it together. And above all, it should be made up of easily digested foods, and balanced in such a way that the various food elements are present in the right proportions. It should not be a heavy meal, consisting of over five to seven hundred calories.” – Lenna F. Cooper, B.S., Good Health magazine, 1917

For almost 100 years, health nuts have been reminding us to eat breakfast – starting, we think, with Lenna here. (Of course, she was writing for a magazine edited by Dr. John Harvey Kellogg, a gentleman who may have had a slight conflict of interest on the subject, but her words continue to fuel guilt trips for breakfast-skippers until this very day.)

Why do we need so much reminding? It’s not like anyone needs to needs to go door to door around the office saying “Don’t forget to eat lunch!”

But I get it. It’s early. You’re grumpy. Five minutes of breakfast means five fewer minutes of sleep. Modern life has trade-offs.

But don’t skip breakfast because you don’t know where to go. If you’re in Wilmington for business, I’ve got a few suggestions on where you can grab a bite – on the quick – before hitting the office.

But first, I pause for this Very Important Note: We need to talk about scrapple.

If you’re not from around these parts, you’re going to see a lot of scrapple on local menus and wonder if that’s something that you’d want to eat. And the answer to that is: “Maybe.” According to Wikipedia, scrapple is also known by its Pennsylvania Dutch name of “pan rabbit” (side note: no one in Delaware ever calls it that and it’s not made of rabbit) and is “traditionally a mush of pork scraps and trimmings combined with cornmeal and wheat flour, often buckwheat flour, and spices. The mush is formed into a semi-solid congealed loaf, and slices of the scrapple are then pan-fried before serving.”

So are you still with me after “semi-solid congealed loaf?” If so, you might be the kind of person who would enjoy scrapple, an often-delicious-but-definitely-cut-from-a-congealed-loaf breakfast item made from the head, hearts and livers of pigs, along with a selection of spices that vary from brand to brand. People around here like scrapple so much, they host festivals in its honor. They make sandwiches out of it at the state fair. They have – and I swear this is true – an annual competitions in which local politicians line up to see how far they can throw it.

And other people around here think it’s kinda gross, even when it’s not airborne.

If I were you, I’d try it – maybe not on a breakfast sandwich (that’s a commitment), but as a side, sure. Make sure you ask for it crispy. Not one like floppy scrapple.

Extra: Something else you might see on local menus is “Taylor ham,” also known as “pork roll.” It’s not an indigenous breakfast meat, but an invasive species brought here by New Jersey ex-pats from their “diners” up north. Think of it as the love child of Canadian bacon and bologna. And it’s delicious on a breakfast sandwich.

If you’re looking for an old-school diner joint, you’re looking for either the Kozy Korner Restaurant or Libby’s Restaurant. Both are the kinds of places where presidential wannabes would show up to shakes hands and kiss babies if Wilmington was located in Iowa. (Joe Biden might be at either spot at any time, shaking hands and/or kissing babies, because, hey, Biden.) Both offer good, unpretentious food, along with someone sitting in a corner reading the local paper (not on a iPad, never on an iPad) and commenting about how something is stupid. Bring cash to both. You won’t need much. 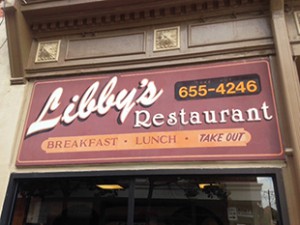 Go to The Green Room at the Hotel du Pont … and then just before you get there, veer right, down the stairs, and you’ll be at The Grill, a cafeteria-style spot for a quick breakfast. Eggs are cooked to order, there are oatmeal and grits on the menu, and the biscuits for the egg-cheese-biscuit sandwich are tasty. The Grill is one of the best-kept secrets in downtown Wilmington. (And you don’t need to be staying at the Hotel to eat there.) 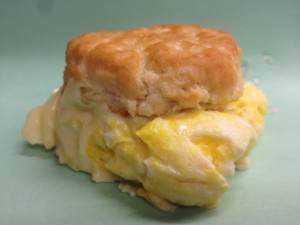 The backstage crew at The Grand Opera House swear by the breakfast sandwiches coming out of Olympic Subs & Steaks right across the street, and well they should. Nothing fancy, but cooked up  hot and fresh, along with plenty of seating if you’re meeting someone. 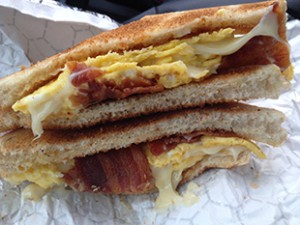 I ordered a blueberry muffin this morning at Benjamin’s on 10th.

Guy: “Would you like that toasted?”
Me: “Nah.”
Gravel-voiced guy sitting at counter: “Get. It. Toasted.”
Me: “I’ll have it toasted please, yes.”

Always listen to unsolicited counter-guy advice. The toasted blueberry muffin was delicious (though I’m not sure I’m ready for the sausage, over-easy egg and cheese on a blueberry muffin that is known as the “Muffinator”). Pop in here if you’re hungry. (Incidentally, they make some of the best cupcakes in town. Bring some to the office, say they’re from Benjamin’s on 10th, and you’ll look like the consummate insider.) 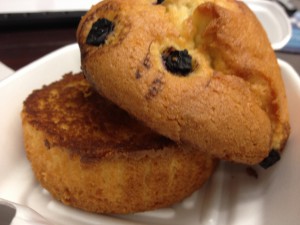 If you’re working over by the courthouse, check out Sub City for a decent, cheap breakfast platter. It ain’t fancy, but it gets the job done.