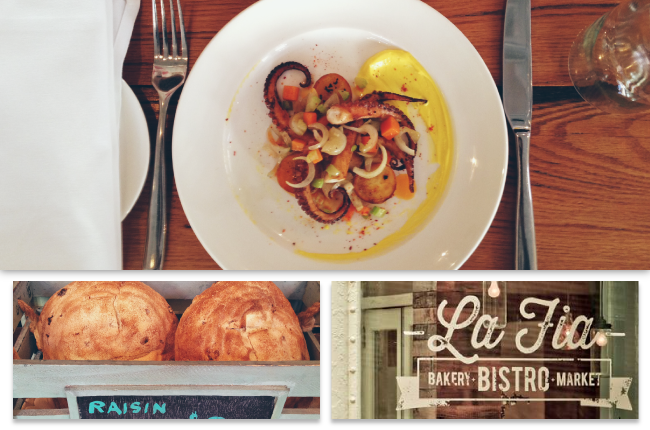 Friday night, a couple weeks ago. It was a busy night in downtown Wilmington, Delaware, but I had a little time between the vampire ballet at the Grand and the Rick James tribute show at the Queen, and I was in need of a bite. Walking between the two theaters on Market Street, I saw the lights of La Fia. Surely, it would be packed. Three days earlier, chef Bryan Sikora had scored his first James Beard nomination the Academy Awards of Foodiedom for best chef in the Mid-Atlantic region. But that probably didnt affect the room that much. La Fias been packed every Friday night since it opened a year ago. But when I glanced through the windows, I spotted an empty space at the bar. Score! Bar seats at La Fia can't be reserved. Theyre available first-come, first-served. So between the dance of the living dead and the dancing of the reanimated Rick, I stopped in for an old fashioned cocktail, some rock octopus and, oh yes, a gougre. (More on that later.)

Bryan Sikora: Career highlights reel Bryans star started to rise at Django, his BYOB in Philly, when he scored four bells from Philadelphia Inquirer critic Craig Laban (becoming the first Philly BYOB to do so). A few years later, he opened Talulas Table in Kennett Square (just north of Delaware), a gourmet food shop with one 12-seat table that booked out one year in advance. The foodie blog Grub Street once named it one of the Five Toughest Reservations in America, behind Raos and Momofuku Ko but ahead of The French Laundry. After Talulas, he worked a bit at the beach and a bit back in Philly before eying Wilmington's Market Street as his new home. And despite the accolades hes gathered in past locations, it was in Wilmington where he earned his first Beard nomination and maybe (it remains to be seen) his first win.

La Fia: The Insider Tips If you plan to dine at La Fia, you best not walk up at 7pm on a Friday and expect a table. Heres a few tips:

Also in the Beard Universe Just in case you're a James Beard groupie, here are a few other places in town you should know: